In collaboration with Diego Martínez

By placing the installation’s headphones on our ears, we hear the unmistakable voice of Felipe Calderón “…que restablecer la seguridad no será fácil, ni rápido, que tomará tiempo, que costará mucho dinero, e incluso, y por desgracia, vidas humanas. Pero ténganlo por seguro, esta es una batalla en la que yo estaré al frente, es una batalla que tenemos que librar, y que unidos, los mexicanos, vamos a ganar a la delincuencia” (“…that to restore security will not be easy or fast, that it will take time, that it will cost a lot of money and even, unfortunately, human lives. But be certain that it is a battle that I will lead, it is a battle that we must fight and that, together, us Mexicans, will beat delinquency.”)

Next, the sound becomes inaudible, not because it can´t be heard but because it is impossible to listen to it willingly. After the presidential address, the voice of a woman crying is reproduced saying “déjame pasar, es mi hijo, es mi casa” (“let me in, it is my son, it is my house”. Someone else, with a thick accent from Chihuaha narrates how a car stopped in front of the house and from the car, someone killed two boys with a shotgun. The person in car has fourteen or fifteen years old and left a note: “Faltan 11. Vamos a venir por ellos” (“Eleven to go. We will come for them”).

The array of horrors continue: stories by members from the army, deserters, policemen, cartel members, and anonymous voices intertwine with sounds of gunshots, executions, duels and parties. Its a collage with various recordings taken from the internet that document life of a country where war has been declared against drug-trafficking. There is a point where a cartel member narrates how him and his partners cross to the US to buy guns.

This work was originally commissioned for the exhibition PCFS – Post Colonial Flagship Store, in 2014 at the freiraum quartier21 of the MuseumsQuartier in Vienna. In the show several artists used the flagship store model that beyond selling look to position the brand through key products and exclusive experiences to create critique about neocolonialism in a contemporary world.

South of Heaven touches on the asymmetric relationship between the US and Mexico using the analogy between music, guns and drug distribution and economy. Martínez shows how the US is the principal distributer of content in the internet as well as the largest consumer of drugs that get made or travel through Mexico and also the largest supplier of guns for the cartels as they promote a war against drugs. The sound played through the speakers of a person sniffing coke grows as does our discomfort with the various elements of the work.

Our northern neighbors don’t know the phrase that in Mexico is part of a collective imaginery, “Poor Mexico, so far from God and so close to the USA!” 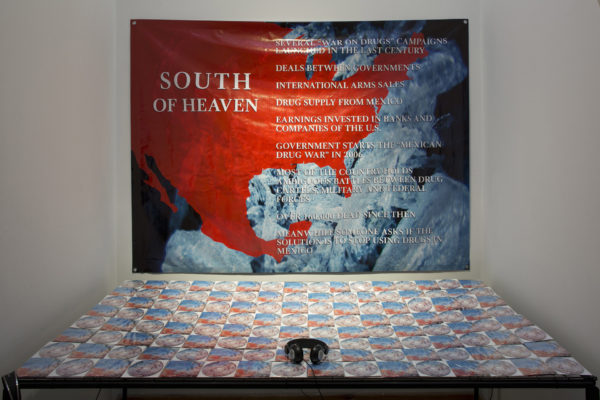 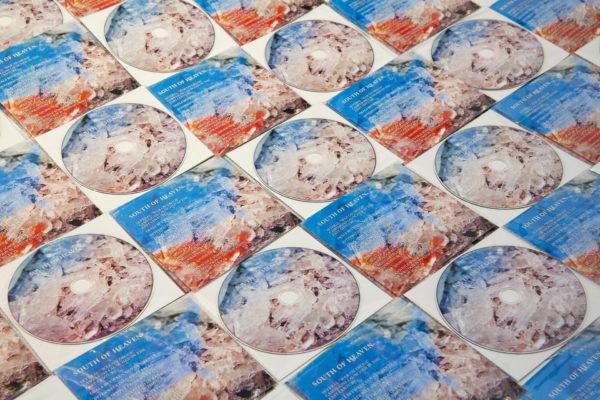