Gelatine to style the hair in crests, “Resistol 5000” carpenter’s glue to sniff before a concert: the aesthetic, the every-day life, the identity. Martínez has created numerous pieces regarding the punk movement (of which he was part during the nineties in Guadalajara) and its history and has also participated in round tables concerning this subject and published diverse texts and interviews. He recently edited “Nada volverá a ser igual”, a recount of the hardcore-punk scene in Guadalajara that includes two CDs and a book filled with testimonials and critiques. Against “retromania” and the prevailing nostalgia of our days that glorify everything, Martínez has kept a critical point of view regarding these movements.

One of the photos of “Secretos del movimiento punk” shows an original Nike cap covered with a –also original- patch of “Conflict”, an iconic band of the “anarcopunk” music and movement. By placing one patch over the other, Martínez questions the business behind revolutions and allows us to see how shifts such as these are as superficial as artificial. The piece also points to the fact that there is no such thing as a perfect movement without contradictions or flirtations with the market. No one is entirely consistent and no one, no matter the symbols that dresses him or her, has a moral superiority, a reason why it would be important that everyone could be open to dialogue and open to listening to one another.

Evidently, this piece has a clear ironic comment: to hide the clothes underneath a symbol of rebellion would be like trying to block out the sun with one finger. 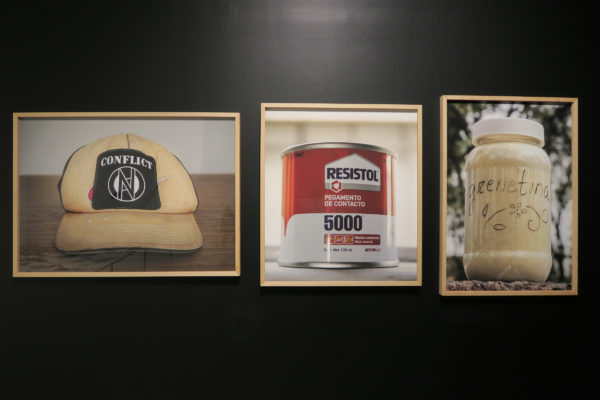