In collaboration with Taller Mexicano de Gobelinos and Samuel Alba

In 2012, while living in Berlin, I used to place in bathrooms and hallways of clubs, bars and forums, some images related to Mexican punk and counterculture; practically intervened photocopies with typing. Honestly, I was fascinated by placing images or graphics of the unknown Mexican alternative scene next to an already clichéd and highly commercialized iconography of people like Sex Pistols, Ramones, Misfits or Metallica, just to mention some examples. One of these photocopies is the one that gave life to the Gobelin. The image is from Samuel Alba (co-founder and drummer of the legendary band Sedición) and is a photograph taken in their second concert, at the beginning of 1989. This image captures the energy, camaraderie, anger, confusion and, at the same time, ingenuity of these adolescents, that’s why I wanted to take it to a format as precious as the tapestry, looking to “glorify” an image that, although for some people it may be irrelevant, for others describes so much of their lives. The phrase was taken from one of the most popular songs of Sedición and the Mexican punk scene. Either we are united or we are sunk. Solin, young weaver of the Taller, was in charge of the gobelino and is part of a generation that has promoted the punk movement in the town of Tonalá. 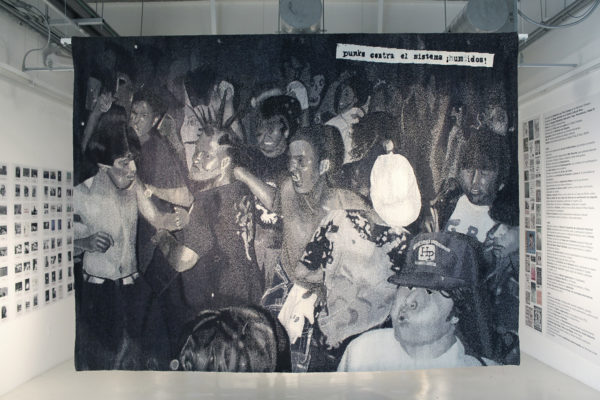