Amateur collaborators were invited to improvise alongside the artist, the idea was to produce an audiovisual installation imitating or creating a hypothetic soundscape. This was a potentially alternative version of the orthodox conception of soundscape, in which humans are mostly passive, only registering what happens around them. Here, they participate actively by transforming it. The collaborators were given the following instructions before acting: 1 Place your hands behind you, your freedom has been limited. 2 Free your hands and body by using an energetic gesture. 3 For as long as you like, improvise, explore the silence, imitate nature, create potential soundscapes. 4 End in silence with your hands behind you, your temporary freedom has ended.

The work offers a playful approach to music and chance, as well as the possibility of studying communication beyond spoken language. Their eyes are covered, first of all, to allow them to concentrate on the sounds emitted by others; secondly, because the work’s aesthetic and its secondary purpose allude to the history of loss of liberty in Mexican society due to socio-political events. Kidnapping, when it is not corporeal, can be psychological, and only acting as “animals” are we noticed by the structures of power and by our own community. 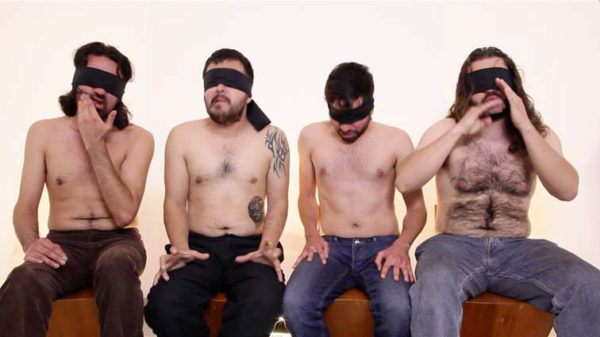